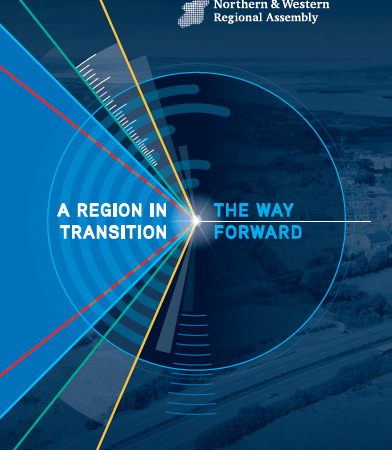 • Investment in health infrastructure in the Northern and Western region is below the State average
• Level of Third Level Infrastructure funding per undergraduate is significantly lower in the North and West (€141 compared to the national average of €197)
• Region has much potential, but needs official policy of ‘positive discrimination’ across numerous areas to address the growing deficit

A study by the Northern and Western Regional Assembly says a policy of ‘positive discrimination’ is required to accelerate growth and stem decline in the north, west and border communities of Ireland.

The report ‘A Region in Transition: The Way Forward’ found startling levels of inequality in terms of investment across a number of key areas such as health, education, infrastructure and transport.

Failure to address these critical investment shortfalls means that a ‘two-speed economy’ has developed in Ireland.

It has also emerged that the EU has downgraded the northern and western region from being considered as ‘Developed’ and has applied a new designation of ‘In Transition’.

The report’s author, chief economist of the NWRA John Daly analysed data over a 10-year period and found significant levels of regional under-investment between the years of 2008 to 2018.

These included the areas of:

• Health: Investment in health infrastructure (in the Northern & Western region – per head of population – was below the State average in 8 out of 11 years
• Transport: The region received just €87,240 for national roads per km compared to the national average of €116,054. Ireland West Airport Knock received the lowest level of capital and operational grants per passenger out of all the regional airports.
• Education: Average State investment in Third Level Infrastructure per undergraduate was significantly lower (€141 compared to the national average of €197)

The NWRA, which administers major EU funding programmes in eight counties in the region says the Northern and Western region has not performed economically as well as other regions in Ireland or relative to the EU norm.

This is despite the region demonstrating more sophisticated local economies specialising in biotechnology, medical technology, precision engineering and AI. There is also an enormous opportunity to enhance the region’s position as an alternative to overpriced Dublin with career opportunities, affordable housing and a cheaper cost of living.

Commenting on the report, chairperson of the NWRA Declan McDonnell said: “Although the national economy is growing, this region’s relative growth has not kept pace creating a two-speed economy. We have seen the impact of regional inequality in the UK, that’s why this report is timely in calling for ‘positive discrimination’ to address the deficit. With the general election campaign ongoing, now is the time to address the future of rural Ireland as we know it.”

According to the report, the Northern and Western Region needs an official policy of positive discrimination such as additional investment and it sets out 11 recommendations.

These include:
• Developing Galway and the region’s designated “Regional Growth Centres” and “Key Towns” to sufficient scale
• Improving the region’s “human capital” levels via its Third Level institutions
• Enhancing regional infrastructure that enables growth, support SMEs in rural communities and encourages the growth of remote working.

Director of the NWRA David Minton, said that if regional gaps in GDP are too large and remain consistent over time, this will inevitably lead to further economic decline.

He said: “Gaps in output tend to be accompanied by high levels of unemployment, low levels of disposable income and prolonged population shifts. This will ultimately continue to see shifts towards Dublin, which is not sustainable. Ireland needs its regions performing”.

But the region’s natural assets and talent pool across a growing tech, bio tech and advanced technology sector provides future hope. “We have a strategy for the next twelve years that will see the region characterised by being more urban, networked, digitally smart and with vibrant rural communities.”

Region in Transition – The Way Forward