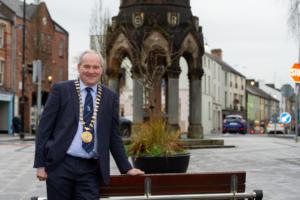 That is the stark warning from the Northern and Western Regional Assembly (NWRA) which is one of three regional tiers of government that oversees regional development in Ireland. It wants a forthcoming review of the National Development Plan (NPD) to lead to more investment in ‘left-behind’ regions.

Cathaoirleach of the NWRA, Cllr David Maxwell, believes that the impending review of the National Development Plan (NDP) in March will be instrumental in tackling the substantial challenges facing the Northern and Western Region’s economy.

He said: “These are challenges which – if unaddressed – could notably enhance regional inequalities that exist in Ireland and undermine the delivery of the National Planning Framework (NPF) and the Programme for Government.  It is time for rhetoric to be backed by “practical commitments.”

The Assembly also believes the West and Border region has been hit harder by the economic impacts of the Covid-19 pandemic – as well as by Brexit – and will need more help and more time to recover.

Cllr Maxwell said: “The forthcoming review of the National Development Plan (NDP), titled Review to Renew, will be the Governments first opportunity to back its rhetoric and start helping ‘left-behind’ areas.  We want the Government to deliver more quickly on meeting Ireland’s challenges and to fulfil the priorities in the Programme for Government, including on housing, health, climate action, job creation and transport.

According to the NWRA, there is a ‘startling’ and widening chasm of regional inequality in Ireland. On many simple measures, such as gross domestic product (of each resident), Ireland has one of the most regionally unequal economies across the EU. This is most acutely felt in the West and Border area.

Cllr Maxwell said such difficulties were reflected in the European Commission’s decision to downgrade the Northern and Western Region from a “More Developed Region” to a “Transition Region” post 2020 – the only region in Ireland to hold such a status.

He added: “The European Parliament’s Committee on Regional Development has categorised the region as a “Lagging Region”, which is a region characterised by extremely low growth which is divergent from the rest of the country.”

Compounding this, according to Cllr Maxwell, “signals indicate that this region can be expected to experience a more complex and long-term recovery from the current pandemic crisis. We are calling on Government to ensure that the NDP review overtly addresses these challenges.”

Director of the Northern and Western Regional Assembly, David Minton, said: “The factors behind this regional divide are complex and historical’. Cities are younger in population profile and rural areas are older. But Covid-19 has presented an opportunity to stem this demographic shift but the trend towards bigger cities and more urban regions benefitting from clusters of economic activity is set to continue.

“When we look elsewhere, these trends, are reinforced by people moving from left behind areas to work in cities. It’s important to remember that ‘poor regions are poor, not because they have large numbers of poor people, but because they have smaller numbers of high-income people. The solution is simple, creating more high value indigenous jobs, through skilled people, research, and increased innovation. “