Recently, the Government closed its public consultation on the first “Offshore Renewable Electricity Support Scheme”, with this forthcoming scheme key to supporting the future growth of Ireland’s offshore wind energy sector. In this consultation, the Northern and Western Regional Assembly has highlighted how this scheme has significant potential in revitalizing the Northern and Western Region’s economy, which has been struggling in recent years as evident from the European Commission’s decision to downgrade the region’s economy.

According to John Daly, Economist with the Northern and Western Regional Assembly:

“The region is well placed to capitalize on the potential of this support scheme. The Northern and Western Region’s onshore wind energy sector already accounts for over a third of Ireland’s installed wind energy capacity which – relative to the size of the region’s population and economy – is quite large, highlighting the presence of transferable and relevant expertise. Furthermore, the region has an array of ports – such as Killybegs, Galway Port and Ros an Mhíl – which have the potential to either act as staging ports during construction of offshore wind energy projects or to serve as operational and maintenance bases”.

To capitalize on this potential and ensure the “Offshore Renewable Electricity Support Scheme” supports balanced regional development, the Northern and Western Regional Assembly has made several recommendations that it feels need to be reflected in the final terms and conditions of the scheme.

According to Denis Kelly, Assistant Director of the Northern and Western Regional Assembly:

“The offshore wind energy sector is a key future growth sector for the region’s economy and its imperative that the scheme incorporates a number of safeguards to support balanced regional development. For example, there should be a role for each of the three Regional Assemblies of Ireland in managing their own region’s offshore “Community Benefit Funds” – as opposed to the suggested model of the fund being managed by a national body – while all offshore developers that submit a bid should also be required to provide evidence as to how their project will support the objectives of the National Planning Framework and the Regional Spatial and Economic Strategy”

Furthermore, John Daly, Economist of the Northern and Western Regional Assembly noted that:

“Successful applicants in the scheme should also be required to provide regional employment and training provisions – maximizing the job impact of these projects within our regions – while all operation and maintenance services need to be located in ports on the island of Ireland. Such measures – along with potential funding through the EU’s Connecting Europe Funding Facility – would be key to ensuring the growth of Ireland’s offshore wind energy sector simultaneously supports our transition to a low carbon society, while also supporting balanced regional development”

Download our submission to the Offshore Renewable Electricity Support Scheme 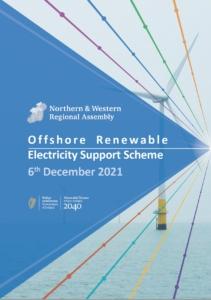 NTA’s “Connecting Ireland” initiative will be key to implementing the...
Scroll to top