Why is this important? According to David Minton, Director with the NWRA; “It’s simple; the goal, at least in business, is to convince the most individuals possible to embrace a new product, service or idea. If the consumer accepts the notion that a product, service or idea is innovative, they’re more likely to engage with the product as it diffuses (or spreads) through the marketplace. As policy makers our job is to remove barriers to this and stimulate regional activity”.

The degree to which a region’s economy can grow depends on a variety of factors – including but not limited to – the ability to create an environment that supports and harnesses the potential of research and innovation.

Commenting on the report’s release, Stephan Raes, Policy Analyst with the OECD, said: “This pilot study of innovation diffusion in the Northern and Western Region of Ireland benefited from close cooperation with the NRWA and active participation by stakeholders in the region. This provided valuable insights on how the region benefits from the contributions of its small, family-owned firms up to its cutting-edge companies and innovative universities and on how the region’s intermediaries play in actively supporting the diffusion of knowledge and administering policy instruments such as innovation vouchers.”

The EU’s 2021 “Regional Innovation Scoreboard” shows that the Northern and Western Region is now the only region in Ireland to be classified as a “Moderate Innovator”. Within this context, it is clear that the research and innovation capacity of the region needs additional resources to stimulate the economy and assist in its recovery following the economic impact of COVID-19 and Brexit.

Patrick Devine, with the Northern and Western Regional Assembly (NWRA) said that “that innovation diffusion  in the Northern and Western Region of Ireland functions well, and interestingly slightly better than in Ireland as a whole. This is down to a spirit of real cooperation. However, we do have distinct challenges, particularly relating to digitalisation of our SMEs and the rate of cluster and sectoral alignment.”.

This was captured in a new report published shortly after the recent announcement of the new Atlantic Technological University.

John Daly, Economist with the NWRA, noted that “A region’s research and innovation system plays a critical role in improving productivity levels, fostering competitiveness and creating and attracting high value jobs to regions”.

In welcoming the publication, Devine said that “Earlier this year, we welcomed the support received by the OECD and the European Commission to develop a new toolkit that would allow regional policy makers to implement an up-to-date assessment of bottlenecks for innovation diffusion, both in our region but also elsewhere. It is imperative we address the structural weaknesses underpinning our moderate innovator status”.

Denis Kelly, Senior Planner with the NWRA said that “It is clear that research and innovation will be instrumental to achieving effective regional development in Ireland. With that we have identified investments to underpin a new model for regional innovation and entrepreneurial training. Significant opportunities exist to exploit and build on existing investments in data analytics, digital innovation hubs, regional accelerators and enhanced supports to our SME’s”.

Kelly went further on the findings of the report, acknowledging that “as a region we need to accelerate the translation of cutting-edge research into commercial applications. Our new
Technological University is at an embryonic stage and needs a wider research footprint with more scope to engage directly with local and regional business, industry and enterprise stakeholders”.

During the research, many stakeholders underlined the need for better functioning clusters in various technology areas between Higher Education Institutes, research institutes, large and small business and start-ups, most of which was emphasised as a key driver for innovation diffusion and productivity growth.

The NWRA aims to use this toolkit as a way of recognising the challenges that exist within the innovation ecosystem, but to identify opportunities for improving policy in collaboration with regional stakeholders. Chairperson of the NWRA, Cllr Christy Hyland has led calls for Minister Simon Harris to consider this as part of the new National Research and Innovation Strategy. 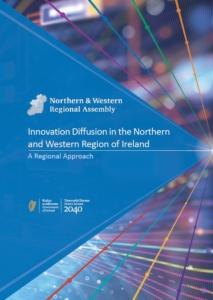 NTA’s “Connecting Ireland” initiative will be key to implementing the...