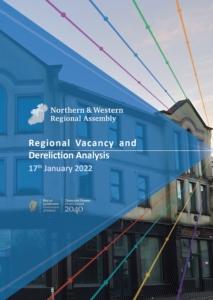 New figures published today show there are more than 44,000 homes and commercial properties either vacant or derelict in the West, North West and Border area of Ireland, with 72% of the region’s towns and villages recording a residential vacancy rate above the State average of 4.9%.

Small towns and villages in the West, North West and Border region face ‘catastrophic’ economic and population decline unless the trend is reversed according to the Northern & Western Regional Assembly (NWRA) which carried out the study.

The NWRA’s ‘Regional Vacancy and Dereliction Analysis’ says the vacancy rates are ‘considerably large’ in the West, North West and Border region despite Ireland needing an average of 33,000 homes per year until 2030 to meet targets set out in the Housing for All strategy. *

A debate about the future of our town centres may have been taking place before the pandemic but COVID-19 has added an urgency to the need for fresh thinking to respond to the challenges faced. The Government is due soon to launch its Town Centre First Policy, with this forthcoming policy central to reducing the number of vacant and derelict properties in towns and villages across Ireland.

Within this context the NWRA has published the analysis which shows that – relative to the national norm – there is a considerably high number of vacant and derelict properties located in the North and West. It says funding resources from the Town Centre First Policy need to be mobilised to address the situation.

Commenting, David Minton, Director of the Northern and Western Regional Assembly said: “Simply put our villages and towns need rescuing. If action is not taken, we face a catastrophic situation where the decentralisation and fragmentation our communities will only deepen. Development has been permitted away from town centres and we have seen a huge growth of commercial and public sector services move out of core urban areas. Out of town retailing, cinemas, sports facilities, offices (public and private), workplaces, homes, schools and colleges have all contributed to sucking activity away from our town centres.”

John Daly, Economist with the Northern and Western Regional Assembly, said: “Our research shows that there are 44,905 residential and commercial properties that were either vacant or derelict in the West, North West and Border region, with 72% of our region’s towns and villages recording a residential vacancy rate above the State average of 4.9%, while 59% registered a commercial vacancy rate above the State average of 11.4%. This highlights the massive potential to redevelop vacant and derelict properties across the West and North West and Border region, as a means to improve housing supply, support population and compact growth targets and rejuvenate the local economies of the region. In doing so, we can deliver more sustainable population growth in the coming years, allowing residents to live within walking distance of local services and workplaces, reducing their reliance on private car journeys and their carbon footprint, while enhancing the quality of life offering of the West, North West and Border area”.

To capitalize on this potential, the Northern and Western Regional Assembly has made several recommendations that should be considered in the forthcoming Town Centre First Policy and for other funding streams that will support the regeneration of vacant and derelict properties in Ireland.

The Regional Spatial and Economic Strategy (RSES) for the Northern and Western Region 2020-2032 identifies the regeneration of our towns and villages. Denis Kelly, Senior Planner with the Northern and Western Regional Assembly said: “We expect the population of this region to grow by approximately 180,000 people with 100,000 new jobs being created. Providing a baseline is the first step in any transformation, and this evidence will assist with targeted support to a ‘housing market’ under distress.  What’s measured gets done, and we now know the extent of the problem. Its about resolving it from here”.

Christy Hyland, Chairperson of the Northern and Western Regional Assembly said there should be a role for the three Regional Assemblies of Ireland in managing and distributing resources in areas experiencing high vacancy and dereliction rates.  He added: “The importance of towns and cities to re-building and reimaging our country in light of the pandemic, is fundamental. We heard time and again that the most successful towns and cities blend housing, retail, workplaces, and leisure, and this is at the heart of our proposals for towns and cities. While we acknowledge that towns, smaller cities and larger cities will all require a different approach, we hope that our report, and its recommendations, will provide a proposal for the vibrant, sustainable towns and cities of the future that can help improve social and economic wellbeing, particularly in the West, North and West and Border areas”.

**The NWRA is one of three regional bodies in Ireland. The Assembly’s primary role is regional spatial planning but it also channels substantial investment through European Regional Development Funds. In recent years the Assembly has evolved as the primary regional leader and advocate for the West, North West and Border region