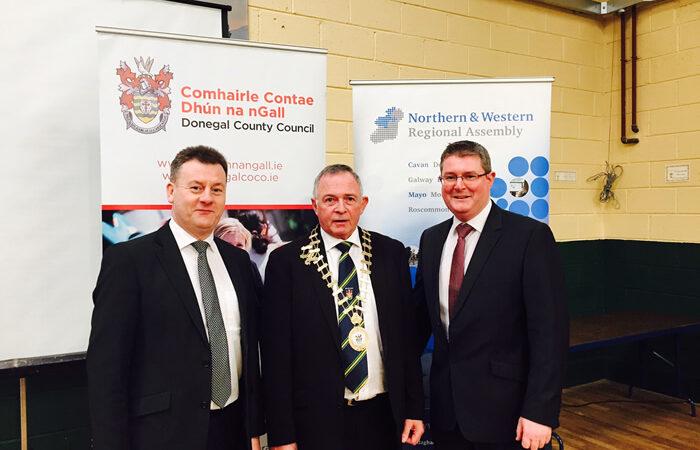 With over 30,000 visitors to Errigal mountain during the summer of 2016, the need for an environmentally sustainable approach to allow for the responsible enjoyment of the mountain is a clear focus of the ASCENT project which was launched on Thursday morning (20th Oct 2016) at Dun Lùiche by Cathaoirleach Cllr Terence Slowey.

Seamus Neely Chief Executive with Donegal County Council paid tribute to the local community for their foresight and commitment to the sustainable development of the mountain.

This project is being funded under the Northern Periphery & Artic Programme and will see the exchange of learning and knowledge between seven sites that have similarities but which also face unique challenges in their own regions.

In launching the project Cathaoirleach Cllr Terence Slowey extended a warm welcome to the European partners from Iceland, Finland, Norway and Northern Ireland and said “not only have we a shared past as descendents of the vikings who explored the northern islands and coasts of the North Atlantic, we also live in the periphery of Northern Europe in quite rural and remote locations that boast an abundance of natural resources and the highest standards of living in Europe.

This project is all about facilitating the responsible enjoyment of Errigal in a way that protects the mountain’s special qualities and benefits the local community. The ASCENT project will see research being undertaken into models of upland access in partner regions and in Scotland, development of a multi stakeholder intervention at Errigal, development of a Management Plan for Errigal, the design of a path for Errigal as well as training programmes on path building and maintenance and piloting path models on sections of Errigal.

‘Rural Ireland’ is far from dead – and has the potential to become an...
Scroll to top