“Greenways are redefining the way our communities and people move. Greenways have the ability to connect urban and rural assets, communities & work places and also connect culture and natural heritage assets” according to OUR WAY Project Manager, Patrick Devine, who works in the Northern and Western Region.

The Irish OURWAY Online Study Visit on Greenways took place on 16th July. Project partners and stakeholders from Bulgaria, Hungary, Poland, Spain & France along with stakeholders from the Department of Transport, Tourism & Sport, Fáilte Ireland, Mayo County Council and Donegal County Council participated in the meeting. The purpose of the Online Study meeting was to showcase Greenways in the Northern & Western Region with specific reference to best practice used on the Great Western Greenway.

The meeting began with introductions from all attendees and David O’Malley (Executive Engineer, Mayo County Council) then went on to present updates on the Great Western Greenway as it is currently, along with learnings that cropped up over the lifetime of the project from the beginning stages of development of the Greenway right through to the present day. There are 265K visitors per annum to the Great Western Greenway and David emphasised the point that it is important to monitor the impact of these visitors on the local economy regularly by using counters along the route and also by surveying local business owners/hoteliers & bike hire shops.

Ronan Gallagher, Communications Manager of the North West Greenway, explained how cross-border initiative between Donegal County Council and Derry City and Strabane Council was awarded €14.8 million funding from the Europe’s INTERREG VA programme to develop 46.5kms of cross-border greenway. The North West Greenway aims to encourage a minimum of 500 people to cycle or walk to school, work or college by 2022 and reduce carbon dioxide emissions entering our atmosphere by over 300 carbon tonnes per year by 2023.

Michael Fitzsimons (Fáilte Ireland) continued the online session by presenting on best practice in terms of linking the visitor’s experience on the Greenway with existing amenities in the area and how best to promote this to the user, be they native or overseas tourists. He described the link between the Wild Atlantic Way tourism initiative and the Cycle Sportif event, which is a 2000km cycling route along the West Coast of Ireland with 17 official stages from South to North.

The meeting saw input from partners around questions of how best to begin a baseline study on the benefits of Greenways. Mercedes Munoz (European Greenways Association) stressed that it is important to have valid data to compare the ‘before and after’ benefits and that a common method of survey is key to having accurate data. There were also questions around the impact on the local environment and how best to protect special areas of conservation and upkeep of greenways and how maintenance budgets operate with reference to the Great Western Greenway.

To learn more about the OUR WAY project and the Interregional Learning process visit the website for more information: www.interregeurope.eu/ourway/ 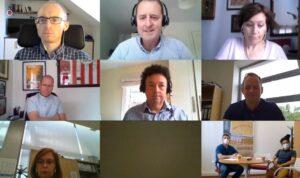 NWRA Submission on the Partnership Agreement 2021-2027
Scroll to top