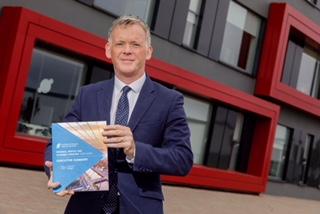 David Minton, Director of the Northern & Western Regional Authority (NWRA). The NWRA is one of three Regional Assemblies, working with key stakeholders at EU, national, regional, and local level to accelerate regional development.

Are our cities dead? That narrative has been overplayed recently, in response to Covid19, particularly during government formation talks with the focus on remote working and better work-life balance. Our towns and our cities are being reimagined right in front of our eyes. A resurgence of life is appearing setting up Ireland’s second cities to be the big winners.

But nonetheless, there is a fundamental shift in approach and policy towards investment and funding as some parts of regional Ireland face decay and decline. Remote working is not the silver bullet in achieving balanced regional development.

We know that economic performance is uneven across Ireland’s regions.  It is not a coincidence that political centralisation is accompanied by incredibly high levels of regional inequality. When compared to other advanced economies, Ireland is a clear outlier when it comes to political centralisation. In other countries – notably Denmark, Netherlands, and France – local and regional governments have real economic and decision-making power and can act as place-shapers for their local areas.

Ireland has no such structure and as a result, its regions face both uncertainty and opportunity.  The significant fallout from Covid19 and the economic damage it has caused, will shine a spotlight on how the country deals with the recovery from it.

Brexit – the UK’s exit from the EU – will too have a significant impact, and will require a reorientation of our economy, with a focus on the regional dimension.

With much of the political and policy attention focused on Dublin, particularly during the formation of the new coalition government, putting a spotlight on the performance of the regions is critical. But shaping their recovery first could serve us all.

That is why a new strategy aimed at effectively addressing the commercial, industrial, economic, and societal imbalance between the east and west coasts of Ireland is so important. The National Spatial Strategy failed due to under-investment. Decentralisation failed due to a lack of will. Ireland now needs to get this right.

The strategy charts a path for high net remote working, more affordable housing, safer cycling, and better work-life balance through concepts such as the ‘10-minute town’.

Launched this week by the Northern and Western Regional Assembly (NWRA), the Regional Spatial and Economic Strategy (RSES) creates an overarching template for how Galway, Athlone, Sligo, Letterkenny and other communities in the West, NW and Border area must develop over the next 20 years to cater for huge expected increases in population. The RSES also includes a Metropolitan plan for Galway’s development.

There is plenty of demonstrable evidence such as:

It is widely accepted that if these differences continue and remain consistent over time, this will inevitably lead to further economic decline. The new RSES is the first co-ordinated approach to policy and an understanding of what is needed to develop our regional economies. Covid19 has captured the value of our regions like never before and the political appetite is present for real change.

The strategy is a roadmap for greater and sustained government investment in the region’s key growth enablers. New infrastructural developments in each town or city are still the primary  responsibility of each local authority and other stakeholders, but they must be  consistent with the strategy for the disparity between the regions to be rectified and to generate greater value from our knowledge and innovation system.

A first-ever Metropolitan Area Strategic Plan (MASP) for Galway is core to the RSES as the city is seen as an effective capital of the region with the potential to become one of the leading cities in Europe. Galway’s population is expected to grow by 50% up to 2040 while the overall forecast for the West and Border area is for a population increase of 180,000 by 2040.

Along with the Metropolitan plan for Galway, the RSES outlines tailored Growth Centre Plans for Sligo, Athlone and Letterkenny that are aimed at breaking the chain of uncoordinated, incoherent and short-sighted ‘business as usual’ development that has served the region poorly in the past.

The RSES brings together local, regional, and national resources to deliver a compelling vision of a sustainable region with modern infrastructure and services, exciting career opportunities and an environment conducive to work-life balance. Its goals are in keeping with the obligation in the Government’s National Planning Framework for the development of an even spread of business and industry across Ireland.

The RSES is a tool to reimagine our communities and villages; our towns and urban places as we begin to remake our own future in a post-pandemic world. It is a portrait of how we learn lessons from Coronavirus and deliver real change for people.

We will boost local economies by investing in skills, innovation and transport. We know that people want an alternative to the over-priced economic hothouse of Dublin and the East of the country. They want good jobs, affordable homes and better lifestyles. The dramatic shift to remote working in recent months because of Covid has given us that impetus.

Regions thrive when there is opportunity and growth. We know this. We have seen it work elsewhere in Europe. This new Regional Spatial Economic Strategy can help to get us there. By investing in regions, the whole country well benefit.

Strategic plan to allow the West and Border regions to compete economically...