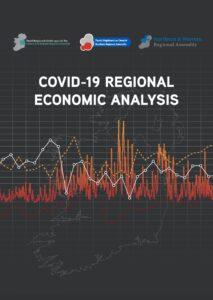 Having been considered one of the fastest growing economies in the European Union in recent years, the Irish economic landscape has profoundly changed due to the outbreak of Covid-19.

As per the latest estimates from the Department of Finance1, the Irish economy is now projected to decline by 10.5 per cent this year, unemployment is expected to rise to 22 per cent by the second quarter of 2020, while the public finances are expected to record a deficit of around €23 billion.

While it is clear that the Covid-19 outbreak will have a significant impact on Ireland’s economy, the degree to which this impact will be felt across Ireland’s regions, counties, cities and towns remains to be seen.

On this basis, the three Regional Assemblies of Ireland have prepared a “COVID-19 Regional Economic Analysis” to identify which geographical areas in Ireland are more likely to be exposed to economic disruption caused by the necessary measures to prevent the spread of COVID-19.

Using the GeoDirectory commercial database, and specifically the NACE codes allocated to commercial units2 as of September 2019, the three Regional Assemblies of Ireland have identified each geographical area’s reliance on the sectors that are likely to be severely affected by the public health measures needed to curtail the spread of COVID-19.

Cathaoirleach for the Northern and Western Regional Assembly, Cllr Declan McDonnell acknowledged that out of the three regions, the Northern and Western region had the highest “COVID-19 Exposure Ratio”, with 48.6 per cent of its commercial units operating in the worst affected sectors; all of whom are likely to be severely impacted from this crisis