The NTA’s “Connecting Ireland” initiative aims to improve transport connectivity across Ireland, particularly for people living outside of our major cities and towns. Recently, the NTA closed its public consultation on the regional and local transport corridors that would be supported under the “Connecting Ireland” initiative.  At a high level, the Northern and Western Regional Assembly in its submission welcomes the transport proposals that have been outlined in this initiative.

According to John Daly, Economist with the Northern and Western Regional Assembly:

“The regional and local transport corridors that will be supported under the NTA’s “Connecting Ireland” initiative will likely improve transport accessibility, frequency and the quality of transport services within the Northern and Western Region. The provision of accessible, frequent, high-quality and affordable public transport services throughout the region will be key to simultaneously supporting the vision and objectives of the RSES of the Northern and Western Region and transitioning the region to a low carbon economy.”

Notwithstanding these positive proposals, the challenges of the Northern and Western Region’s transport system are quite significant and wide ranging, and further proposals will be required to address issues relating to regional transport accessibility, frequency and capacity.

According to Denis Kelly, Assistant Director of the Northern and Western Regional Assembly:

“Based on the latest data, residential dwellings based in the Northern and Western Region are – on average – 3.8km from a public bus stop, which was notably higher compared to the State average of 2.6km, with this ratio much higher for counties such as Donegal where residential dwellings are – on average – 13.5km away from a public bus stop. Furthermore, in this region people generally live close to a transport option with infrequent daily services – with 50% living close to a transport option with less than 10 daily departures, compared to the national average 32%.”

Furthermore, John Daly, Economist of the Northern and Western Regional Assembly noted that:

“Considering the scale of these challenges, the NTA’s “Connecting Ireland” initiative should “Positively Discriminate” towards the region, by providing additional regional and local transport services that will address problems relating to the accessibility, frequency and capacity of the region’s transport system. For example, the NTA’s “Connecting Ireland” initiative should ensure that more than 70% of those living outside of Galway City in the Northern and Western region will have – at minimum – access to a public transport service that provides at least three return trips each weekday to a nearby town. The initiative should also aim to improve the capacity of our bus fleets, the number of available drivers, the quality of waiting facilities, interconnectivity between the Galway Metropolitan Area, our Regional Growth Centres and Key Towns, while significantly reducing resident’s reliance on private car journeys” 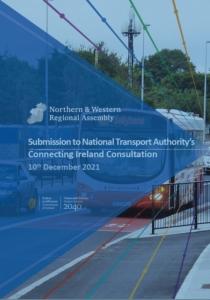 Offshore wind energy crucial to economic recovery in the Northern and Western...